Last night, I sat with my wife Kelli, in a theater that is 100 years old. The sight of the bare brick walls and the curvature of the ceiling made me think of so many days gone by. The beautiful weathered wooden floors creaked, as if they are trying to tell you a story, a story of all the people that had graced her grand hall for a century. As we entered this beautiful historic landmark, the marquee illuminated the evening’s first sight of darkness as a beacon for all to come, and they did. Every seat in the house was full for the evening performance, “Sounds of the Seventies.” When I entered the house doors my anxiety level began to rise, I felt a little nervous, almost as if I was walking into class my freshman year of high school back in 1979. I knew why this was happening, I knew why I felt this way. Thirty nine years ago I walked into a classroom, a classroom mind you that was on a stage. A classroom where the desks were arranged in a circle and in the middle of the circle was this young, fresh out of college, full of energy fireball of a teacher Ms. Cathy Segraves. This teacher, although short in stature, was large in life. This small, yet very loud teacher, began vigorously spewing out nonsense such as William Shakespeare, J. R. R. Tolkien, Dickens and Poe. She began with such elation telling us about creatures called Hobbits, their Lords and his rings. A weather forecast about a Tempest and possibly an English naval vessel with a crew of singing sailors. As the on-slot continued the names Gilbert and I believe Sullivan where in the mix, and possibly something about wearing tights, yes tights. This five foot something teacher was able to get football playing jocks to not only wear tights, but stand on a stage and perform William Shakespeare. 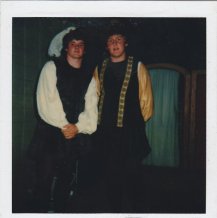 I would say she was, and still is, quite something. This woman, this mother, this grandmother, and this teacher unbeknownst to her had taught me so much, and tonight the lessons continued. When I was in high school she tried to mold my mind, but tonight she molded my heart. Her ageless smile and her kind and loving words, her hugs and softly spoken whispers of sorrow for the loss of Lindsay truly touched my soul. Thank you Cathy and Bill Furpless for inviting us to be part of your evening. Thank you for keeping this beautiful landmark in your family and resurrecting Mr. Bill’s grandfathers legacy to entertain once again. Please take a moment and read more about the beautiful Amuzu Theater in Southport N.C.

After thirty-nine years the teacher is still teaching the student.

As for this parent, winters bitter snow is the horrific weight of grief carried everyday for Lindsay. In my heart I know all the seeds that were planted and I know one day, because of the SON’s love, when all the snow and grief are no more, I will again see, The Rose.